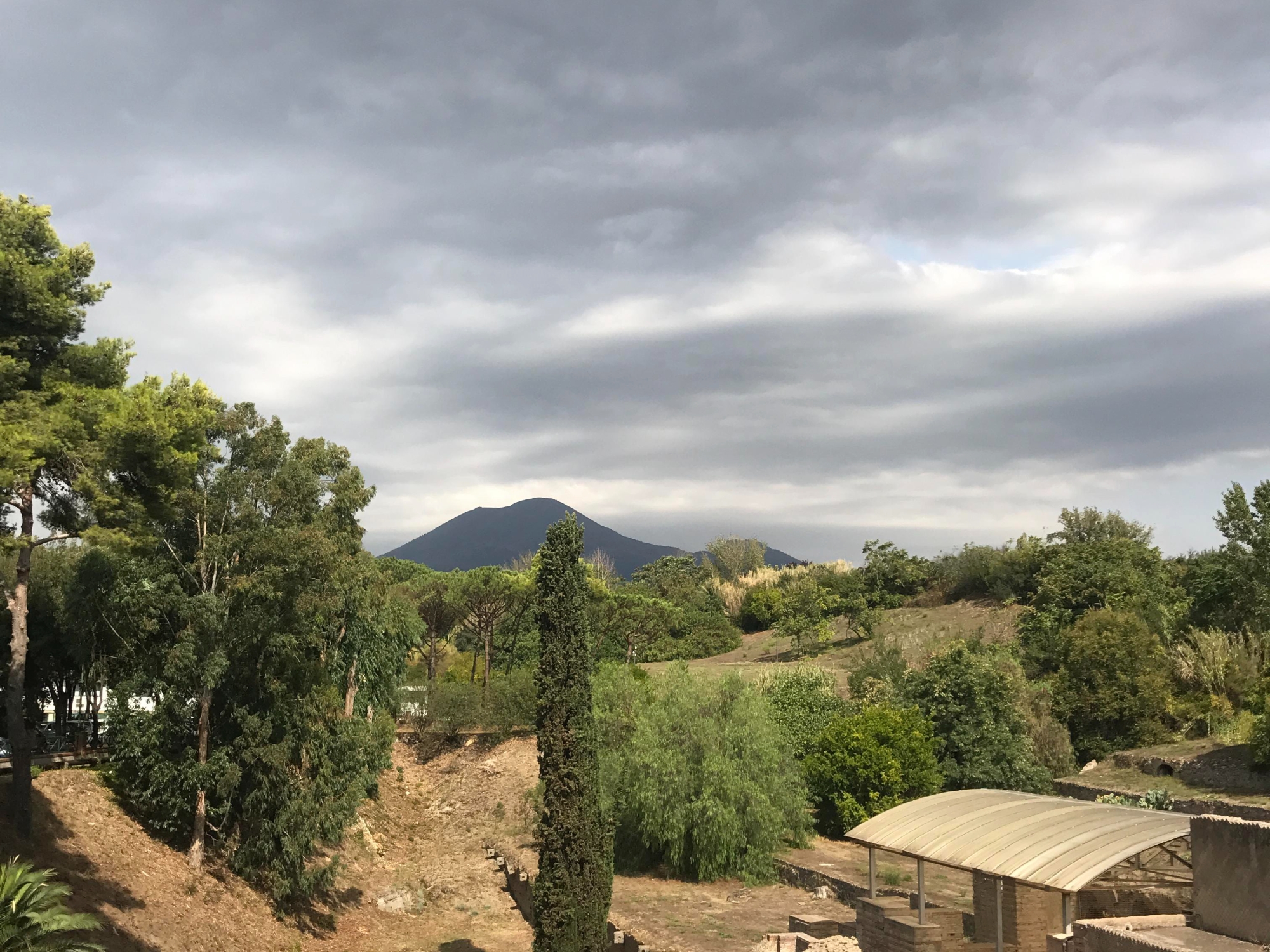 We departed Sorrento on Sunday morning, in search of Pompeii! I was originally very excited to have the opportunity to tour such a historical site, however, the tour left more questions in my mind than answers.

All 200 of us descended on the historical site after three days of minimal sleep, expecting thunderstorms for the rest of the day. However, the rain held off and it was over 85 degrees. We were sorted into groups and assigned tour guides, but our tour guide wasn’t incredibly enthusiastic and I was honestly concerned the poor man would collapse- he was extremely sweaty. Nevertheless, he led a group of twenty college girls through the ruins and the huge crowds. 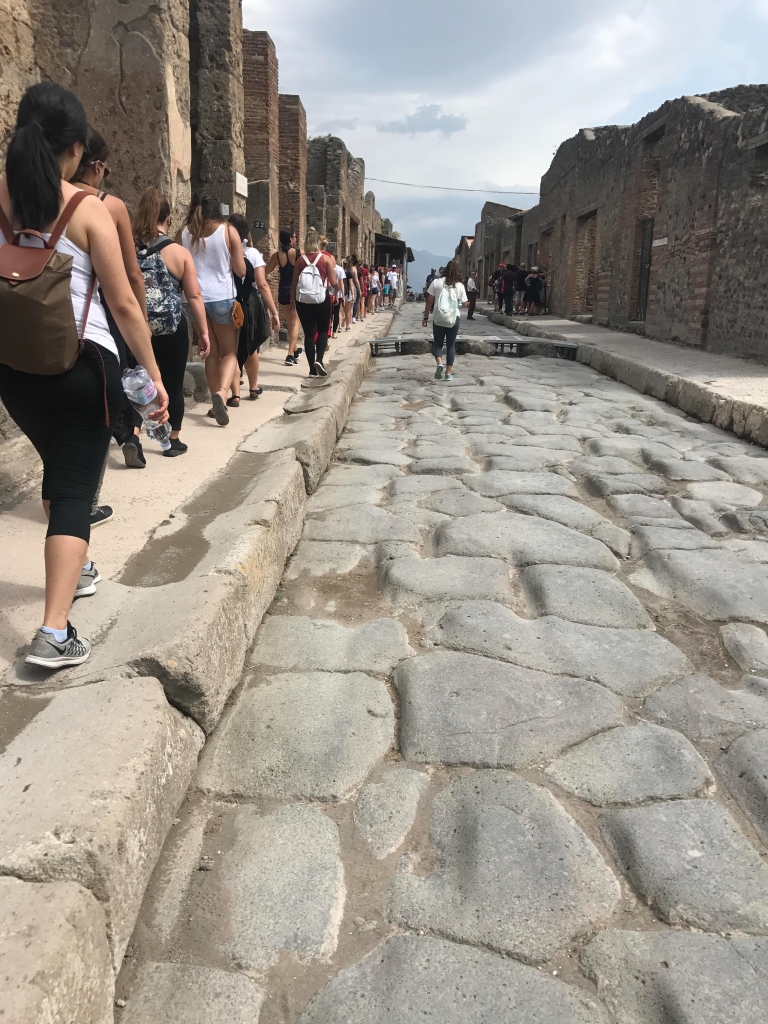 I learned that Pompeii is the second most visited archaeological site in the world, after the Colosseum, and after Sunday, I’m not surprised by that at all! The number of people was staggering. However, having the opportunity to see the grooves in the stone created by carts so long ago and checking out the mosaics that are still mostly intact was incredible.

However, due to the heat, we were all sweaty, creating perfect conditions for, when the wind did pick up, sediment to pelt us and stick to our skin. However, not many people can say they were covered in Pompeii dirt! 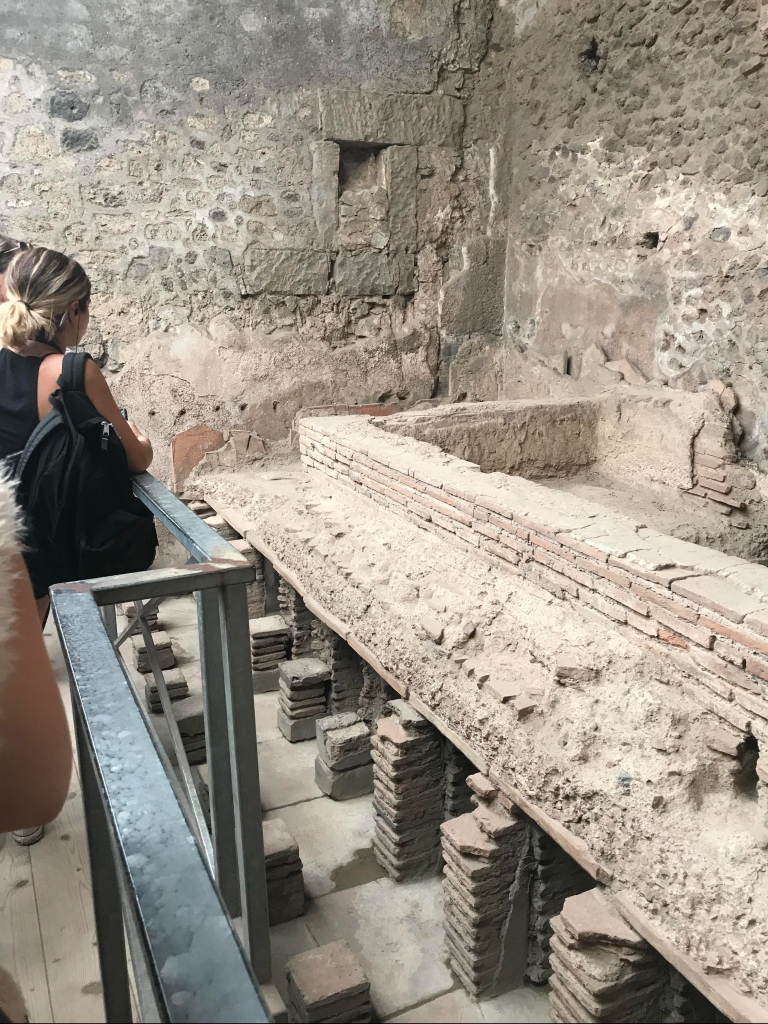 (This is where the Pompeiians bathed- it’s a Roman style bath!)

After years of Latin and Roman studies, visiting Pompeii was a must-see, but I  have to say, the way the Pompeiian tour guide explained the erruption slightly differed from the way I remember learning about it. Our guide was extremely honest, explaining that the huge statue that greeted us when we entered, as old as it looked, was younger than him and actually Polish. He also explained, when I asked to possibly see some of the artifacts/ molds of people, that “only 3,000 people died” and they are all buried. I’m not sure if the man was just tired and sick of us, but that confused me! For some reason, I pictured Pompeii as this place with molds of people all over the place.

Nonetheless, I enjoyed the opportunity to visit a place I will probably never see again, that none of my family or friends have seen yet! I also was in absolute shock when the guide reminded us that Mt. Vesuvius is currently less than a third of the size it was when it erupted!

This is a text widget. The Text Widget allows you to add text or HTML to your sidebar. You can use a text widget to display text, links, images, HTML, or a combination of these. Edit them in the Widget section of the Customizer.
Loading Comments...
Comment
×
%d bloggers like this: